Here lies Fabian “Fabe” Gaffke, who played in 129 games over 6 seasons in the major leagues. He was a feared slugger in the minor leagues though, particularly for the Minneapolis Millers. Gaffke played for the Boston Red Sox (1936-9) and Cleveland Indians (1941-2). Yes, his family put a ceramic baseball card on his headstone, which is indescribably awesome.

Gaffke, an outfielder, first began to make a name for himself playing in the Polish Roman Catholic Union in Milwaukee’s Municipal League. He came under the guidance of Zygmunt Kaminski, the sports editor of the Polish newspaper Nowiny Polskie, according to Borchert Field: Stories from Milwaukee’s Legendary Ballpark, written by Bob Buege. Ziggy, as he was known, wanted Gaffke to move to the Milwaukee Brewers of the American Association, but the Brewers were part of the St. Louis Browns farm system that was developed by Branch Rickey. It was a common fear back then that a farm system would strand players in the minors indefinitely unless Rickey promoted or traded them away, so he instead steered the young hitter to the Chicago White Sox. The Sox sent him to the Waterloo Hawks of the Mississippi Valley League in 1932, where the 18-year-old Gaffke struggled to hit .200. He came back home for a year and re-entered pro baseball in 1934. 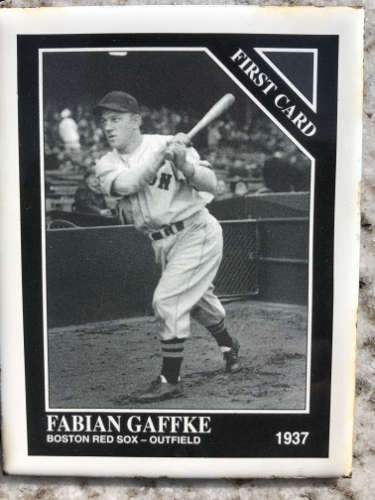 Gaffke slugged 15 home runs with Des Moines in 1934 before moving to the Millers in 1935. He would spend parts of seven seasons with the team and seldom disappointed. He hit .302 with 19 homers for the Millers in 1935 and drew the attention of several major-league teams the following spring. The Phillies, Cubs, Yankees, Giants and Reds were all in on him, but Gaffke ultimately signed with the Red Sox. He stayed in Minneapolis for most of the season, where he finished 3rd in the AA’s MVP race (Rudy York won it) with a .342 batting average, 37 doubles and 25 home runs. Gaffke’s strong season merited a September call-up to the majors, and he struggled against big-league pitching in 15 games. He batted .127, but he did manage his first MLB home run off the Browns’ Tommy Thomas on September 12. Gaffke also made a fine running catch to start a 9-3-6 triple play against the Philadelphia A’s on September 20.

Gaffke spent the most time of his career in the majors in 1937, when he appeared in 54 games for the Red Sox. He made the most of his opportunity, slashing .288/.342/.484 with an OPS+ of 102. He drove in 34 runs and hit 6 homers, including one each on both ends of a doubleheader against the Senators on Sept. 30. In spite of his fine hitting in Boston, Gaffke still spent half the season in Minneapolis, and he never got a fair shake in the majors again. He only appeared in 13 games for Boston in 1938. One of those appearances, for two innings, was as a catcher. The Boston Globe reported that he’d tutored under old-timer catcher Tom Daly and looked good behind the plate, even throwing out a baserunner. His sole 1940 MLB appearance, and last with the Red Sox, came in a pinch-hitting role on April 25.

Gaffke spent all of 1940 and most of 1941 with the Millers again. He blasted 21 homers for Minneapolis in ’41 and batted .305. He had 7 RBIs on May 22, 1941 against the Milwaukee Brewers, hitting 2 triples and a grand slam home run. He also homered against the Brewers on June 24 in an 8-4 win, spoiling the debut of Milwaukee’s new owners, Bill Veeck and Charlie Grimm.

The Indians picked up Gaffke in August 1941 as “selective service insurance” in case outfielder Clarence Campbell was drafted. Gaffke was 27 at the time and service exempt. He got into 4 games with the Tribe, with 1 hit in 4 at-bats. He played his final games in 1942 with the Indians, appearing in 40 games with a .164 batting average.

Gaffke’s career was derailed by bone chips in his elbow. He reported to Spring Training with the Indians in 1943 but left in early April. He left a note for manager Lou Boudreau that read, “This is a lousy thing to do but it is best and I must do it. When you read this I’ll be on my way home. I’m no good for anything but a bush league, playing about once a week. I’m going to work.”

He was true to his word, going to work for electronics company Allen-Bradley in Milwaukee. He also played on the Allen-Bradley company baseball team. Gaffke was 29 years old, married and father of a two-year-old daughter. “I was offered a year-round job in a plant here. I decided to take it because it would provide security for my family. I’m absolutely through with baseball as a career,” he told the Associated Press.

Well, he wasn’t completely through with baseball. He returned to the Millers in 1946, at the age of 32, to give it one last try. His elbow had healed, but a four-year layoff didn’t help him. He was released after 18 games, managing a .250 batting average. In 10 years in the minor leagues, he hit 107 home runs and had a .301 batting average.

Gaffke’s SABR biography reports that he spent 34 years working for Allen-Bradley, retiring in 1977. He made it back to Minneapolis in 1955 to attend the final game played at Nicollet Park, home of the Minneapolis Millers (and current site of a Wells-Fargo bank branch). Gaffke also worked as a semi-pro umpire in Milwaukee. In 1970, he took to the field one last time to take part in a pantomime of “Casey at the Bat” at Milwaukee County Stadium before a Brewers-Red Sox game. He was joined by the likes of Dizzy Trout, Joe Just, Ken Keltner, Ryne Duren and Joe Houser, who played the part of Casey.

Gaffke was popular with his teammates, displaying a good sense of humor. He even attempted to learn the saxophone so he could duet with teammate/accordion player Oscar Melillo. Fabian Gaffke was on the executive board of the Wisconsin Baseball Old Timers Association through the end of his life. He died on February 8, 1992 from heart complications at his home in Milwaukee. He was 78 years old. He is buried in Milwaukee’s St. Adalbert Cemetery.

If you enjoyed reading this post and wish to leave a tip for the writer, you can do so at https://ko-fi.com/ripbaseball. Donations pay for research/website expenses.

I am a professional journalist with a deep and abiding love of baseball and music. My family tolerates this about me. I belong to the Society for American Baseball Research (SABR). View all posts by Sam Gazdziak